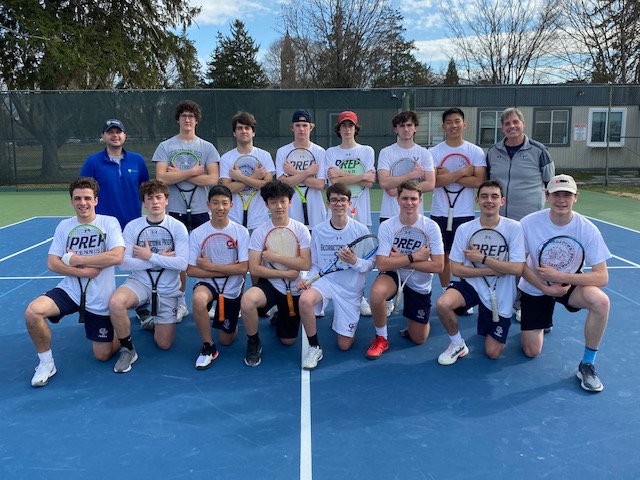 Since being named head varsity tennis coach in the fall of 1998, Coach Keith MacKinnon has led the Hoyas varsity tennis team through 21 fun, competitive, and character-building seasons.

During his tenure, Prep varsity tennis has earned four I.A.C. titles and compiled a record of 198-72 in head to head matches. More importantly, the Prep tennis program has embraced a culture defined by sportsmanship and camaraderie. The over two hundred Prep student-athletes that have competed at tennis during the span of slightly more than two decades share a common experience of striving for individual success while learning how to best serve the need to the team and their teammates.

The tennis program has benefitted from excellent assistant coaches and junior varsity coaches over the years. The current junior varsity coach, Bob Maloney, has been particularly effective with his uniquely infectious level of energy and enthusiasm. Under Coach Maloney, the J.V. team has earned three consecutive first place league finishes. The trio of current varsity assistants is the latest of the many Prep tennis alums that have come back to Prep to mentor their successors. John Leary ’96, and Ian McGinnis ’10, and Jack Walsh ’14, are instrumental in mentoring the players to form a knowledgeable, cohesive, and competitive team.

Coach MacKinnon, who taught at Prep from 1989-2008 and also serves as an assistant basketball coach at Prep, looks forward to a 2020 season filled with teamwork, camaraderie, and the healthy pursuit of another I.A.C. title. Optimism abounds due to the abilities and character of the returning varsity and junior varsity players. Of course, every Prep student is welcome to get involved with the great lifetime sport of tennis. As a new school year approaches, every member of the Prep community is welcome to venture over to the courts and find out “What all the racket is about!”