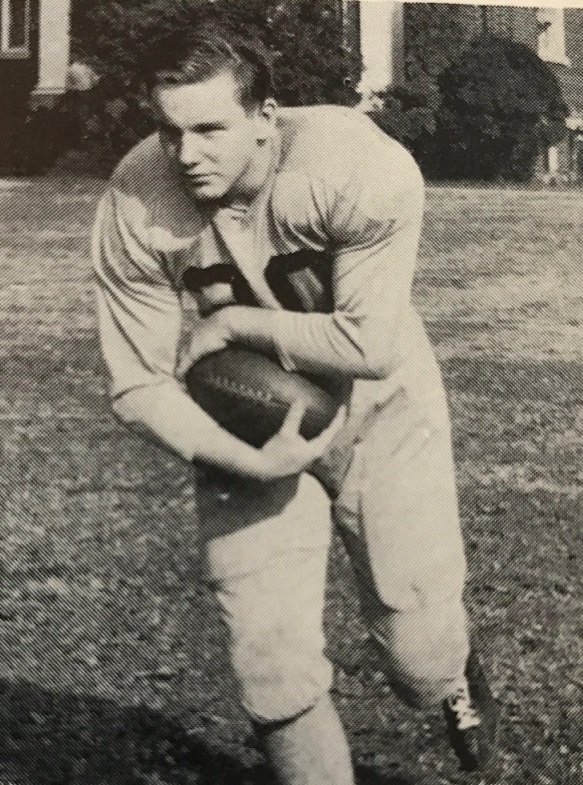 Georgetown Prep has announced plans for the creation of the William V. Bidwill '49 Stadium at historic Fegan-Galvin Field.

William "Bill" Bidwill '49 passed away on October 2, 2019 in Phoenix, Arizona. The Bidwill family made an extraordinarily generous gift to For The Greater Glory: Georgetown Prep's Legacy Campaign in Bill's honor for the creation of the School's new stadium.

A two-sport athlete, Bill excelled on the football field. A boarding student from Chicago, Illinois, he started on Georgetown Prep's 1948 Hall of Fame football team at fullback and kicker. Known as a hard-running fullback, Bill led the Hoyas to an undefeated record his senior season. One of the top teams in the Washington, D.C., Metropolitan area, Prep earned an opportunity to play for the District Championship against rival Gonzaga College High School in the last game of the season, but a polio outbreak shut down Prep's campus for several weeks. As a precaution, the students left campus and the season was finished. In addition to his accomplishments on the football field, Bill was a key member of the Georgetown Prep baseball team during his junior and senior years.

Bill's father, a prominent Chicago sports figure and member of the Pro Football Hall of Fame, purchased the Chicago Cardinals (now Arizona Cardinals) in 1932. Bill chose to attend Prep after his father died to be close to his brother who was an undergraduate at Georgetown University. It was a difficult time for his family as his mother suddenly had to take over day-to-day leadership of the family businesses, including the Cardinals. She became the first female professional sports team owner.

During his time in Phoenix, Bill became an important contributor to the city's business community and a prominent but understated leader in the philanthropic community. He tried always to live as a man for and with others.

Bill was awarded the Insignis Medal, Georgetown Prep's highest honor, in 1990. He was also inducted into the Georgetown Prep Athletic Hall of Fame in 2017. His sons, Michael '83, Patrick '85, and Timothy '90, also attended Georgetown Prep.

As part of the Campus Center, Residence Hall, and New Athletic Facilities project, Georgetown Prep will build a new stadium at historic Fegan-Galvin Field. The William V. Bidwill '49 Stadium will be a state-of-the-art athletic stadium. The field will be outfitted for football, lacrosse, and soccer.

Bill's son, Michael J. Bidwill '83, who succeeded Bill as controlling owner of the Arizona Cardinals and also as serves Vice-Chairman of the School's Board of Trustees, noted on the announcement, "Georgetown Prep was such a prominent part of our dad's life and truly shaped the person that he became. As a family we felt that this project can serve as a lasting way to honor his life as well as the important role that Prep – and athletics in particular – plays in developing the next generation of leaders."

Rev. James R. Van Dyke, S.J., Georgetown Prep's President, added, "This is an extraordinary gift to the School in memory of a man who loved and supported his alma mater. Since the beginning of my time as President, the Bidwill family has been extremely supportive, in particular Michael with his service on the Board of Trustees and co-chair of our Capital Campaign. I had the pleasure of meeting Bill on a number of occasions and we are forever blessed to have his name represented with Prep. On behalf of all of us at Georgetown Prep, I am deeply honored and humbled to accept this momentous gift."

Photo is of Bill Bidwill '49 as a member of the School's varsity football team.