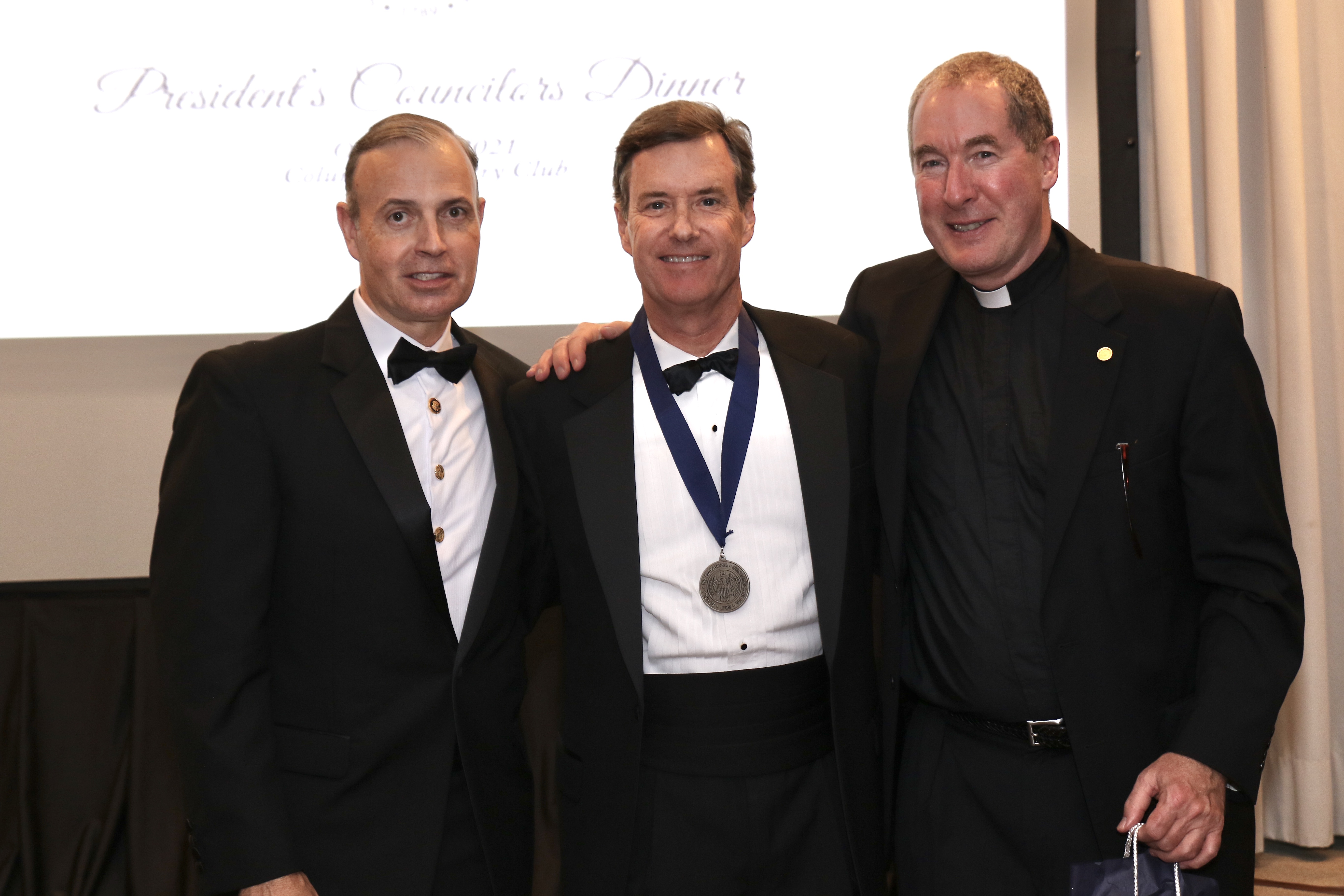 The evening was one of celebration, joy, and gratitude for gathering Prep alumni, parents, and friends together after many months apart. Unable to host the 2020 President's Councilors Dinner last October, Rev. James Van Dyke, S.J., President of Georgetown Prep, was delighted to have all three of last years' honorees present this year: Insignis Medal Awardees Rev. Robert McChesney, S.J., Class of 1967, and Bishop William Byrne, Class of 1982, and Joyce Awardee Dr. Erik Maginnis, Prep's Academic Dean.

Expressing gratitude to those in attendance for the opportunity to be together, Father Van Dyke opened by saying, "Your love and commitment of Georgetown Prep makes the mission we undertake possible, and on behalf of all of us who work each day to advance Prep as a leading Jesuit educational institution, I thank you."

Chair of the Board of Trustees Jeff Paravano welcomed the guests, followed by Father Van Dyke presenting a brief State of the School, noting the robust programming on campus with all classes in session, the School's full enrollment, and all of Prep's residential students back on campus from 18 countries and 14 states.

Father Van Dyke also expressed, at this pivotal moment in Prep's history, gratitude for Prep's extensive campus enhancement project and the For the Greater Glory campaign, operating full steam ahead with construction and design teams working hard to make the magic happen. Georgetown Prep's For the Greater Glory campaign will result in the building of a

As Father Van Dyke noted, "Strengthening our endowment will ensure that the full Prep experience and a Jesuit education will be accessible and affordable for our current families and for generations to come."

Established in 1981, the Insignis Medal is Georgetown Prep's highest honor. The award's name is taken from The Spiritual Exercises of Saint Ignatius Loyola, and his Meditation on the Kingdom of Christ. Insignis is one who is outstanding or exceptional in service to other people, to the community and, in this Meditation, to their eternal King...St. Ignatius used the phrase: "Insignis in domino" – "Outstanding service to the Lord."

John served as Chair of Georgetown Prep's Board of Trustees from 2019 to 2021, a time when the School faced the sudden onset of the COVID-19 pandemic, as well as broke ground on the construction project for the new Campus Center and Residence Hall. During this time, the Board worked closely with the administration to preserve a high degree of spiritual, academic, and athletic excellence for Prep students, while also enabling the resources needed to protect the health and safety of students, faculty, administration and staff. These investments allowed the School to create an exceptional virtual campus and, once conditions allowed, to deliver more on-campus school days per student during the 2020-21 school year than any other high school in Montgomery County, Maryland.

John joined the Board of Trustees in 2014, and chaired its Development Committee from 2015 to 2019. He also served on the Board's Presidential Search Committee that resulted in the selection of Rev. Scott Pilarz, S.J., as President in 2014. He has been an active member of Prep's Alumni Association, and as a Prep parent, served as Co-President of the Parents Board, as Class Networking Chair, and as a proud member of the Father's Club. For the past 21 years, John has been a senior executive and attorney in the Washington office of Deere & Company, a leading provider of equipment, technology, and solutions to customers around the world.

Former Trustee and past Insignis Medal recipient Denis Dwyer had this to share about John, "John was an incredibly important advisor to me when I was the chairman of the Board of Trustees. As challenging issues arose, as they do in all organizations, I would often call John to get a perspective that was grounded, thoughtful, measured and pragmatic. Issues are sometimes charged with emotion and John was always able to acknowledge the emotion but focused on the substance of the challenge and recommended a thoughtful way forward. I was so grateful to have him as a member of the Board and the Board's Governing Committee that I often consulted."

Rick has dedicated much time and service to his alma mater. As the President of Self Storage Services, Inc., Rick has brought his practical business executive experience and entrepreneurial spirit to his servant leadership at Georgetown Prep. He served on the Alumni Association Board, from 1998-2004, assisting with The Little Hoya Golf Classic Committee by helping solicit tournament sponsorships. Rick also chaired the Annual Fund, now The PREP Fund, for two years. He was also awarded Alumnus of the Year. As for his Board of Trustees support, he first served as a non-Trustee member of the Investment Committee for the Board of Trustees, followed by serving as a Trustee from 2013-2018, on which he chaired the Building and Grounds Committee and Finance Committee.

John Coyle, Director of Development, had this to say about his dear friend, "Rick was liked and appreciated by everyone during his high school years. He was athletic and smart, a great teammate and student. Rick was a model Prep representative then and now. We are fortunate to call him one of ours."With over 39 years of experience in the acquisition, development, and management of self storage, office, and industrial real estate ventures, Rick's company currently operates and owns an interest in twenty self storage facilities, four office buildings, and two triple net leased properties, totaling 1.2 million square feet and approximately 9,000 storage units.

The John Edward Joyce Award is presented to a member of the faculty who exemplifies Georgetown Prep's core values and ideals in recognition of a deep commitment to the School and its students.

Mr. Tirado, a native of New York City, has twenty years of experience working in independent education, formerly at Peddie School in New Jersey and the Haverford School in Pennsylvania. He is in his 10th year at Georgetown Prep. Mr. Tirado is currently a member of the Social Studies Department, teaching U.S. History, AP Government and Comparative Politics, and American Studies. In addition, Mr. Tirado works with special projects in the International Office and as a Duty Administrator in the Residential Life Department.

Last spring Mr. Tirado was named the Director of InterCultural Diversity. In this role, he works to provide a comprehensive strategic and operational vision for leveraging the diversity among staff, faculty, students, administration, and alumni as an organizational benefit. Mr. Tirado continues to work with the School's leadership to help create a culture of trust and comfort where different perspectives are honored, valued, and celebrated within our Jesuit tradition. He earned a bachelor's degree from Wesleyan University, a Masters of Arts degree from Columbia University, and a Juris Doctor degree from the University of Pennsylvania. 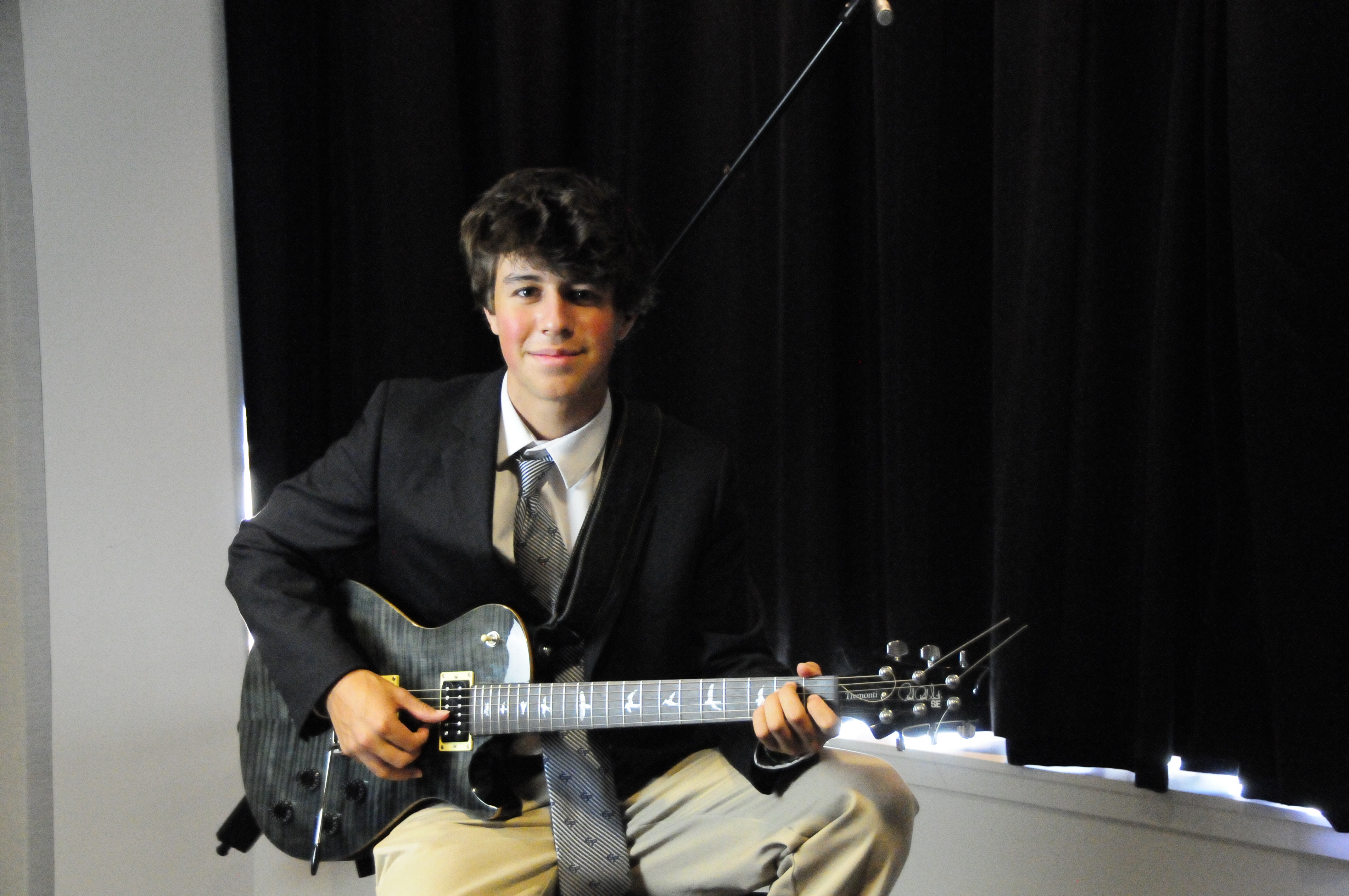 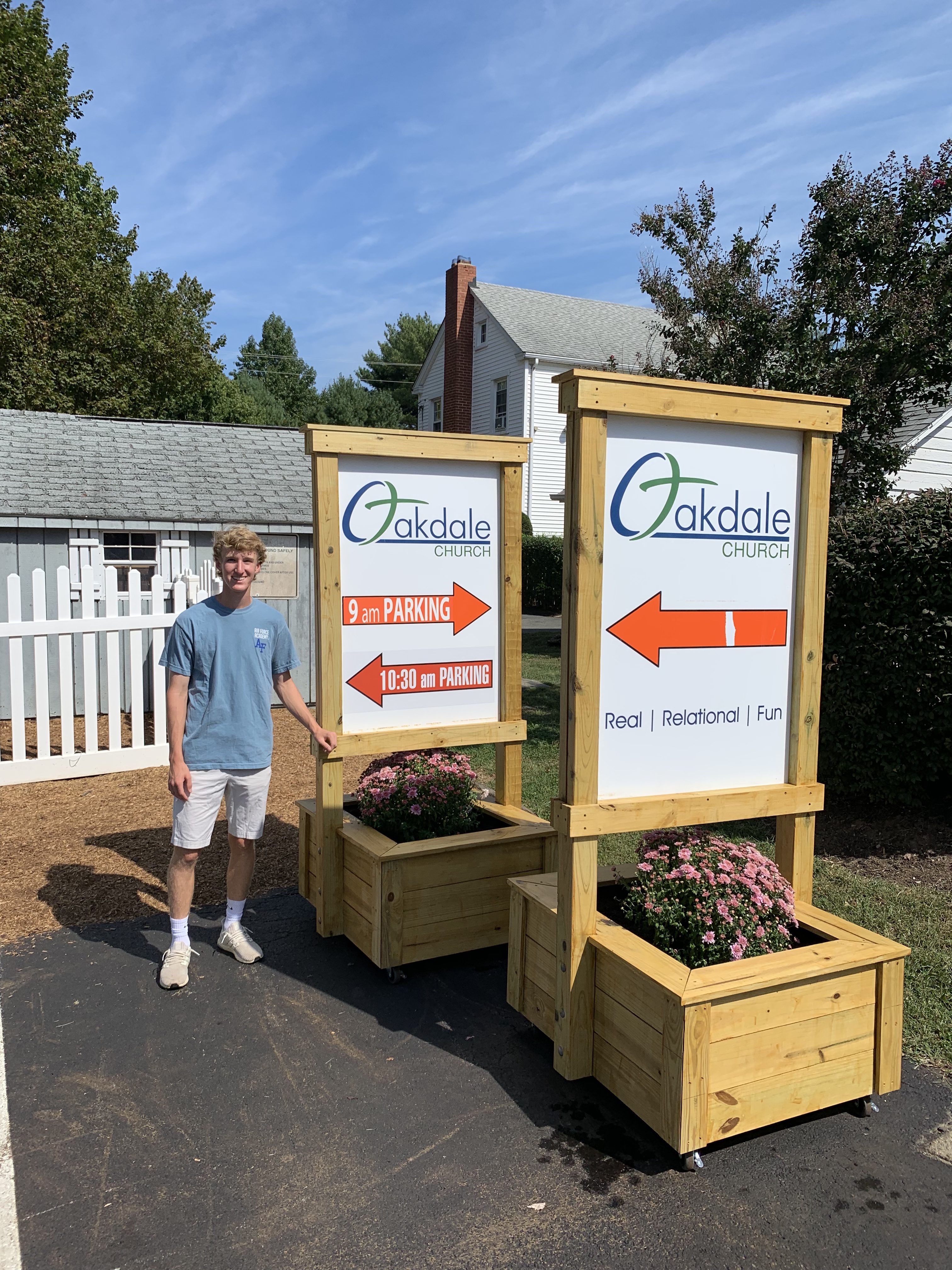 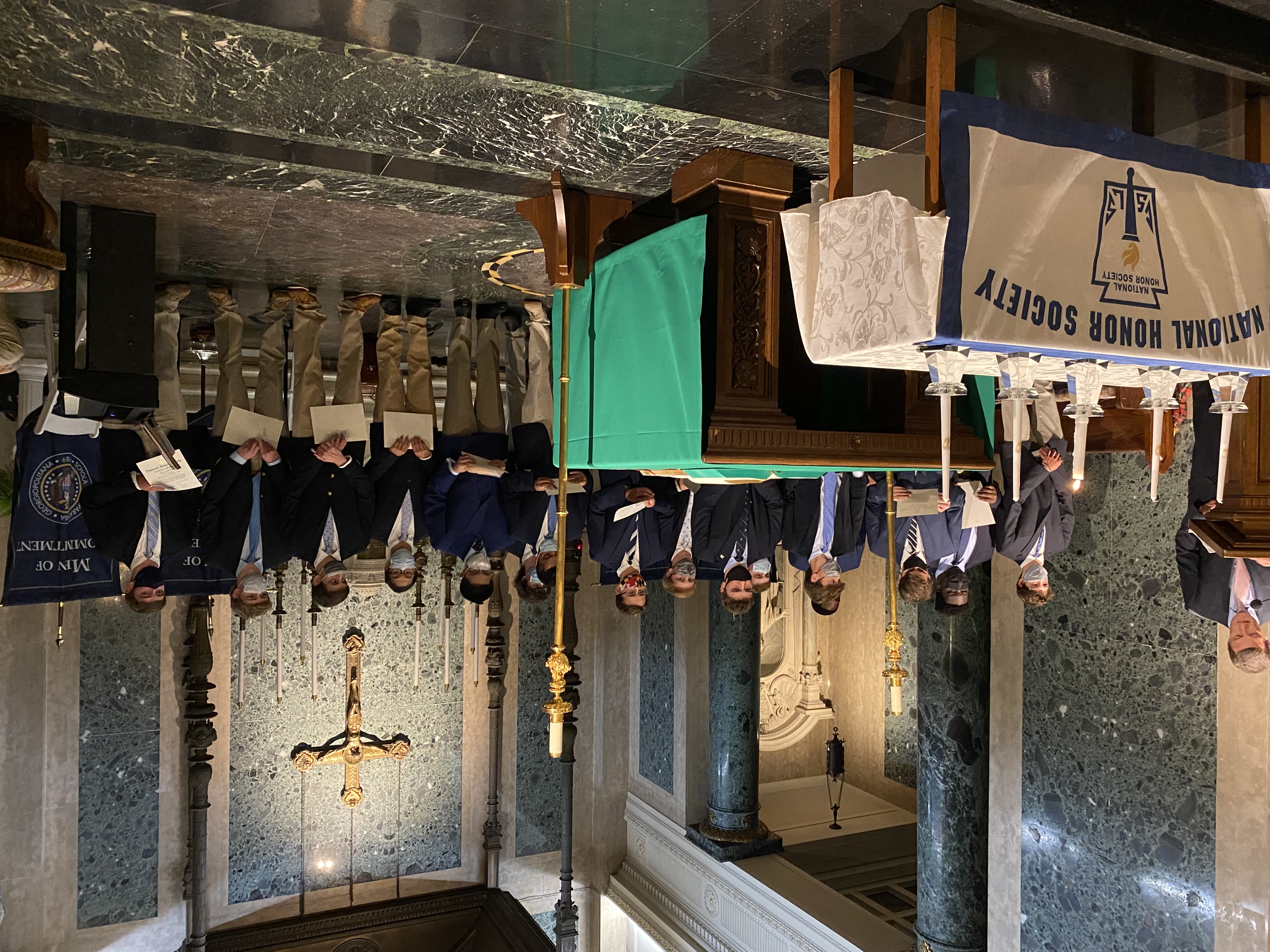