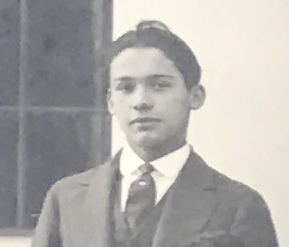 An Elocution contest in Mid-May proved to be a high point of the first school year at the New Prep. The star would be Alejandro Angel Escobar. Alejandro, the son of a Colombian coffee merchant with offices in New York and Paris, had moved through preliminaries to the final round of the 1st Annual Elocution Contest held on May 9. Elocution was stressed in each class at the New Prep and involved clear and expressive speech with "distinct pronunciation and articulation, intonation, vocalization, modulation, phrasing, delivery, utterance, and fluency." Each of the 12 finalists had prepared a selection of prose or poetry for delivery.

On May 9, Alejandro took the gold medal with his presentation of Gertrude Askea's "The Soul of the Violin." Charles Dean and Whitney Walters won second and third place, respectively. They, along with Angel, would represent the New Prep at an elocution contest to be held at Georgetown University a week later. The competition would pit the New Prep students against older students drawn from each of the three Preparatory classes still at the University. It seemed a hopeless mismatch.

On Sunday afternoon, May 16, the entire student body accompanied Angel, Dean, and Walters to Gaston Hall on the University campus. The Newprep News reporter captured the feeling of his fellow students when the results were announced. "Our delight can therefore be better imagined than described, when the judges gave a unanimous decision in favor of Alejandro Angel Escobar." The reporter went on to add that Angel's delivery of "The Soul of the Violin" was marked by "more than ordinary finish and grace, while its pathos and depth of feeling . . . placed him far above the level of the average schoolboy elocutionist." After having suffered defeats at the hands of the "Old Prep" in football and basketball, the New Prep, in the person of freshman Alejandro Angel, had turned the tables on its "tormentors."

Two weeks later, at the banquet that marked the end of the school year, Fr. John B. Creeden, S.J., President-Rector of the University, alluding to Alejandro's victory, could not contain his glee, "chiding" the students in mock seriousness for their "one major failure" during the year: "A lack of respect for your elders!" The gathering of students exploded in applause. Alejandro Angel was a hero, and the following fall, he was elected President-of-the-Yard.