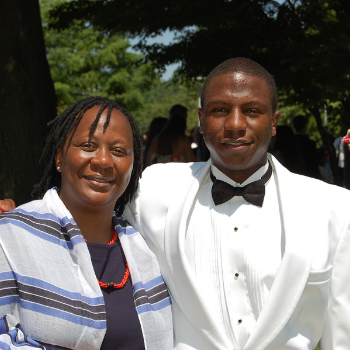 Anesu Nyawata '14 was born and raised in Montgomery County, Maryland, along with his younger brother, Tino. His family is originally from Zimbabwe. Anesu attended the Woods Academy for middle school and graduated from Prep in 2014. He attended Rhodes College from 2014-2018, where he majored in Biology and was a member of the basketball team, winning the conference championship in 2017. Anesu is currently working as a research scientist for Smithers Avanza, a contract research organization. In addition to his job as a scientist, he also works as a basketball skills trainer for players in elementary school through high school. Anesu is also passionate about giving back to the community through charity work and service.

What have you done since graduating from Georgetown Prep?

Since graduating from Prep, I attended Rhodes College in Memphis Tennessee, where I played basketball for four years. Since graduating from Rhodes, I have been working in the pharmaceutical/drug development industry as a scientist. My passion for basketball is still a major aspect of my life, but I express it now through training young players as well as mentoring them.

How were you able to manage the responsibilities of being a student-athlete at Rhodes College, majoring in biology, and playing basketball? How do these skills translate to your job as a scientist at Smithers Avanza?

Managing my time between basketball and class was definitely a challenge, especially since I declared my major later than most. It put me in a position where I had to take two or three lab courses for each of my last four semesters. I will say that going to Prep definitely prepared me for that challenge, and I believe that my high school experience was part of the reason that I was able to excel academically and athletically during that time.

How did you first get involved with the nonprofit organization, Hoops4Hope? What aspirations do you have for Hoops4Hope?

My extended family is originally from Zimbabwe, so we make it a point to try and visit as often as possible. During the summer of 2017, my mom and I stumbled across Hoops4Hope while we were searching to find places for my brother Tino and I to play basketball during our stay. We read about the charity's mission and the things that they were doing every day for children across Africa and thought that it would be great to try and help them in some way. Since both Tino and I had experience coaching and working at camps, we thought the best way that we could offer our assistance would be to help with one of their clinics and throw some of our drills in the mix. They welcomed our participation with open arms and we've kept the relationship going ever since. We lent a hand similarly in 2019, which is what led me to start brainstorming ways that I could contribute once I was back in the US.

What was one of your fondest memories as a student at Prep?

My fondest memory as a student at Prep was the time I got to spend with my friends during break, lunch, and other times outside of class. The countless laughs and memories that I have from all those years ago still feel like they just happened yesterday.

What impact did Prep have on you?

Prep helped me tremendously as far as how to approach a heavy workload. This has proved to be useful, both in undergrad and in my professional career. The building blocks of study habits and time management that I was given have and will continue to pay dividends as I navigate through life.

What advice would you have for current students?

My advice for current Prep students is to keep an open mind and expose themselves to as many different career fields as possible in this stage of their lives as well as once they get to college. It's okay to not know exactly what you want to do in life during this time, but the more experiences that you have been exposed to, the more well equipped you can be to make informed decisions about what you want in the future. Prep has a lot of great resources, especially through the alumni network, so don't hesitate to reach out to fellow Prep graduates who work in a field that you are interested in.