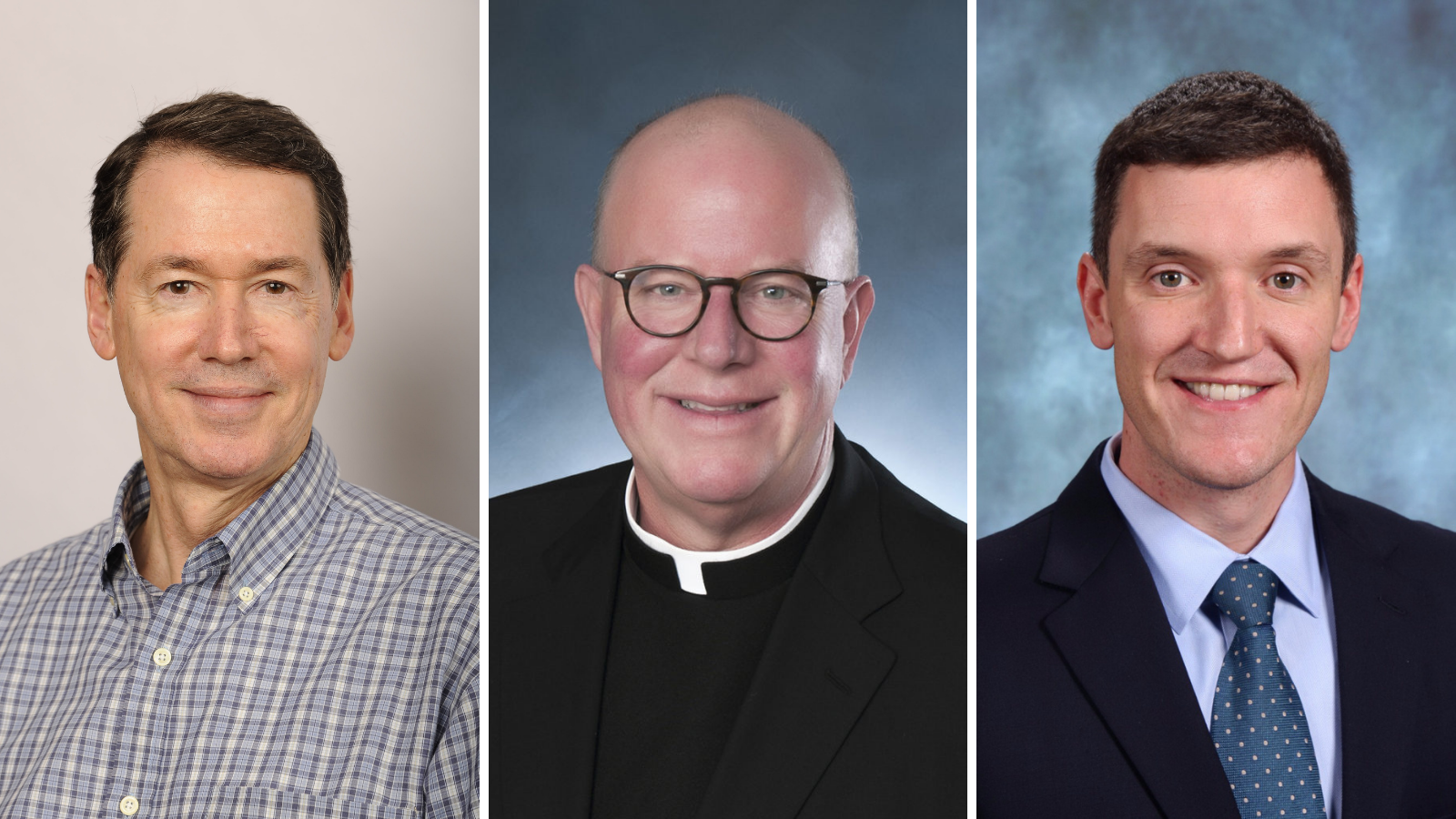 The meaning of Insignis is outstanding or exceptional. This word is taken from the Latin text of the Spiritual Exercises of Saint Ignatius Loyola, and his Meditation on the Kingdom of Christ. Insignis is one who is outstanding or exceptional in service to other people, to the community and in this Meditation, to their eternal King. They overcome natural selfishness by offering service even greater than expected. St. Ignatius used the phrase; "Insignis in domino" – "Outstanding service to the Lord."

Established in 1981, the Insignis Medal is Georgetown Prep's highest honor. The awards name is taken from The Spiritual Exercises of Saint Ignatius Loyola. This year, Fr. Van Dyke awarded the School's highest honor to Fr. McChesney and Fr. Byrne.

A graduate from the proud Georgetown Prep Class of 1967, Fr. McChesney entered the Society of Jesus in 1973 at Wernersville and ordained a Jesuit priest in 1981. Since then, he has served the Church in many different ways and capacities—including as a parish priest here in D.C. at Holy Trinity, Director of Campus Ministry at Saint Joseph's University in Philadelphia, and Director of Intercultural Initiatives and Sabbaticals at Santa Clara University in California. Fr. McChesney has dedicated much of his Jesuit life to the Jesuit Refugee Service, including serving as the Director of JRS/USA in Washington, D.C. He was the Founding Director of the Jesuit Refugee Service Immigration Detention Project in Los Angeles. Most recently, Fr. McChesney was missioned in Amman, Jordan, serving at Sacred Heart Parish, the only parish in Jordan for English-speaking Catholics. He also served as a Mission and Identity support person for JRS Jordan, which accompanies urban refugees in the capital. Fr. McChesney is currently assigned as a spiritual director to the staff of the Jesuit Center for Spiritual Growth in Wernersville, PA. In this new role, he is devising an innovative Ignatian paradigm and retreat for the traumatized, including refugees, war veterans, survivors of sexual assault, and COVID caregivers.

Fr. Byrne is a graduate from the Class of 1982 and is well known across the Washington Metro area. Fr. Byrne matriculated to the College of the Holy Cross where he received a bachelor's degree in English. After Holy Cross, he studied at the Pontifical North American College in Rome and received a Bachelor's in Sacred Theology (STB) in 1992 and a Licentiate in Sacred Theology (STL) in 1994, both from the Pontifical University of St. Thomas Aquinas in Rome. He was ordained in 1994 and assigned to Little Flower in Bethesda where he served as parochial vicar until 1995. He then was assigned to Saint Jude in Rockville. For eight years from 1999-2007, Fr. Byrne was the chaplain for the University of Maryland's Catholic Student Center in College Park. He was named pastor of St. Peter's parish in Washington, D.C. in 2007 where he served until 2015. From 2009 until 2015, while serving as pastor of St. Peter's, Fr. Byrne was also Secretary for Pastoral Ministry and Social Concerns for the Archdiocese of Washington. In 2015, Fr. Byrne was named pastor of Our Lady of Mercy parish in Potomac, Maryland where he currently serves. He has also served on the Archdiocese of Washington's Vocations Team, Formation Board, Priest Council, Priest Personnel Board, and the Archdiocesan Administrative Board. Fr. Byrne recently published a book, "5 Things with Father Bill: Hope, Humor, and Help for the Soul." He also has a popular web series, "5 Things with Fr. Bill." He serves as chaplain to the students and faculty of Mater Dei School.

On October 14, Pope Francis announced Fr. Byrne's appointment as Bishop of the Diocese of Springfield, Massachusetts.

The John Edward Joyce Award is presented to a member of the faculty who exemplifies Georgetown Prep's core values and ideals in recognition of a deep commitment to the School and its students. This year's recipient is Dr. Maginnis.

Dr. Maginnis has spent his entire professional career—15 years—as a member of the faculty and staff at Georgetown Prep. After Dr. Maginnis graduated from Georgetown in 2005, he joined the Prep faculty that fall as a member of the Classics Department and a dorm parent. Since 2005, he has served in various capacities in addition to his primary role as a classroom teacher. His work as Chair of the Classics Department, dorm parent and assistant to the Residential Dean, assistant coach of JV baseball, faculty moderator of the National Honor Society and Yearbook, member of the Technology Committee, and faculty leader in many of Prep's service and retreat programs arm him with a broad prospective on the student and faculty experience at Georgetown Prep. In June 2016, Dr. Maginnis was promoted to Academic Dean. In this role, he has been instrumental in expanding Prep's curriculum, including developing a robust summer school program for both returning and incoming students.

Since the beginning of the pandemic, Dr. Maginnis has been hard at work developing and implementing Prep's virtual campus, working with the campus operations, technology teams, and assisting the School's faculty to ensure a smooth transition from in-person instruction to 100% virtual in March of last year. He and his team are a big reason as to why Georgetown Prep has received such rave reviews from TABS and NAIS for our hybrid instruction plan.

The President's Councilors Dinner is held annually to honor leading donors to Georgetown Prep's Annual Fund and current and past winners of the Insignis Medal.